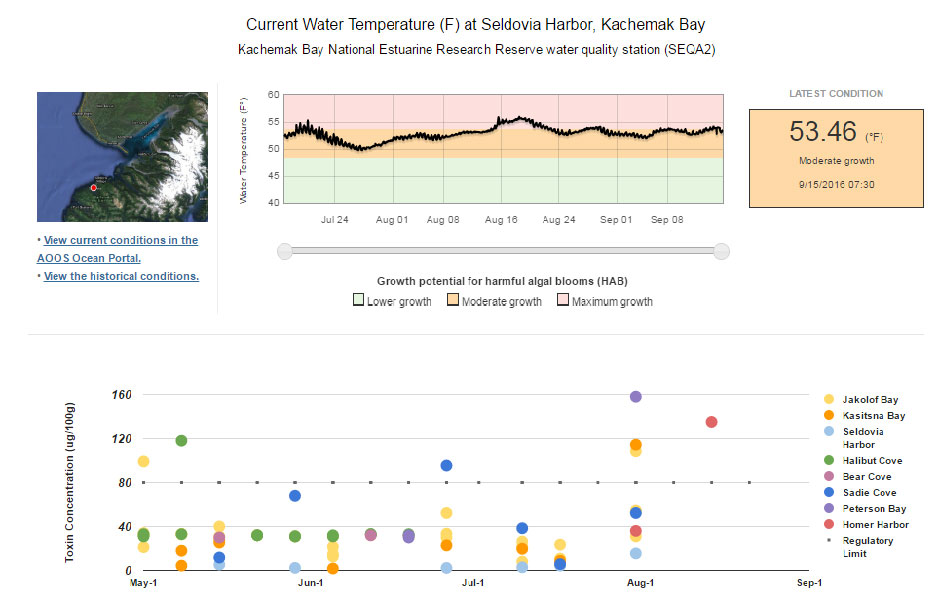 Axiom Data Science, in partnership with the Alaska Ocean Observing System and the NOAA/NCCOS Kasitsna Bay Laboratory, are pleased to announce the release of the new Harmful Algal Bloom Information System for Kachemak Bay.

Harmful algal blooms (HAB) have long been a threat in some coastal Alaskan communities. As ocean temperatures rise over the next few decades, HABs are expected to occur more frequently. While the State of Alaska regularly tests commercial shellfish toxins, recreational and subsistence shellfish are not tested. Access to information about environmental conditions influencing HABs is important for making informed choices about shellfish consumption to reduce the risk of shellfish poisoning.

This Harmful Algal Bloom (HAB) Information System provides information on current water temperatures in Kachemak Bay and how these temperatures may affect the development of HABs and resulting shellfish toxicity. HABs are large increases in the amounts of toxic species of marine algae, also known as phytoplankton, that can cause human illnesses such paralytic shellfish poisoning (PSP). PSP events can cause illness in people, primarily from eating shellfish that filter phytoplankton for food and may concentrate toxins in amounts dangerous to both people and marine mammals.

This HAB Information System provides information to help in making decisions about whether or not to recreationally harvest shellfish. It is NOT a direct measure of current shellfish toxicity. It is ALWAYS recommended to check advisories from the Alaska Departments of Health and Social Services (ADHSS) and Environmental Conservation (ADEC) before harvesting shellfish.